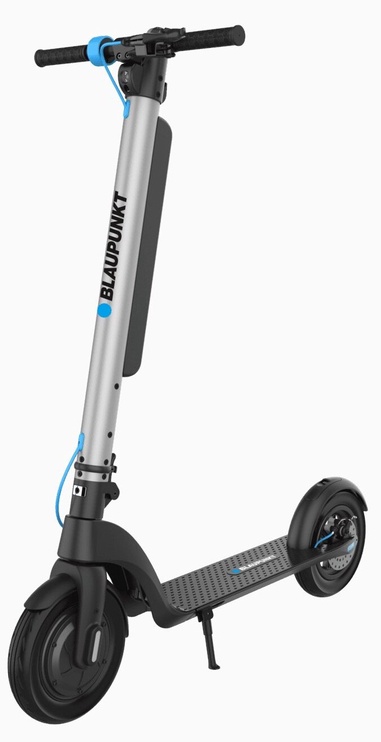 This electric scooter is a real hit, and is still gaining popularity. Thanks to this vehicle, you can quickly get to work, school, or university – no more traffic jams, or getting squeezed on public transport! If necessary, you can fold and pack it into the trunk of your car, or take it onto a bus or tram.

People also appreciate electric scooters because they are ecological vehicles – they do not emit exhaust fumes, and, as a result, do not pollute the environment. They also generate low operating costs.

The ESC910.2, due to the incredibly long distance it can cover, allows you to move quickly and safely, even to a destination far from your home or work.

The 350-Watt engine delivers a top speed of 25 km/h, which can be controlled by a three-step speed adjustment (3 gears). Thus, users can not only decide on their travelling speed, but can also adjust it to their age and skills, so that they can feel safe. The speed riders will reach is also influenced by their weight, the type of surface they are travelling on, the ambient temperature, and even the wind.

The ESC910.2 electric scooter is equipped with a large battery with a capacity of 10 Ah, which facilitates riding for up to 40 km. This distance, like the speed, is influenced by several factors: the vehicle load (max. 120 kg), the type of surface, and the ambient temperature. However, it can be doubled by replacing the battery with spare units, which are available under the ACE910.2 symbol.

The battery is mounted in a special opening located in the vertical steering stem. Replacing it is quick and easy, and it can be charged either when mounted on the scooter or separately after removing, as it has an independent charging socket. The time needed to fully charge the battery is about 5 hours.

The ESC910.2’s 10-inch inflatable-tube wheels provide a high level of riding comfort, and make it easy to move on a wide variety of surfaces. Thanks to its shock-absorption function, the ESC910 scooter can be easily ridden on pavements and asphalt, as well as on dirt paths and bumpy gravel roads. The 10-inch wheels also provide a good clearance between the vehicle and the surface, which ensures that even riding over curbs will not be an issue