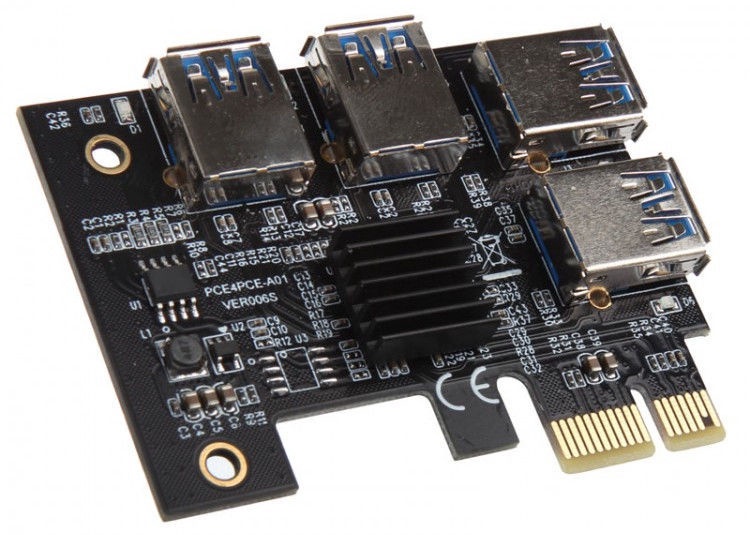 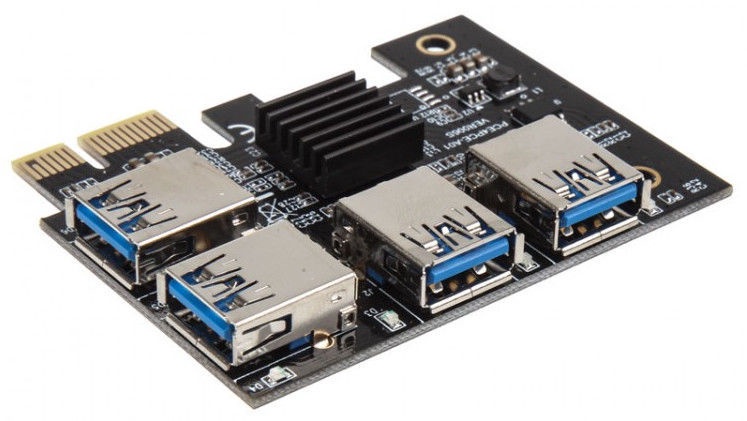 The Kolink PCI-E x1 to Quad x16 - Quad-Mining / Rendering Upgrade Adapteris the ideal accessory to build or extend a mining rig with up to four graphics cards and, considering the available bandwidth, can be used with separately available riser cards for other systems and applications such as Altcoin, Ethereum or Ether or Zcash as well as for Distributed Computing, Rendering and Boinc. Bitcoin is a virtual payment method launched in 2009 that is created and managed by all participating clients of the decentralized Bitcoin network. Like many other proof-of-work cryptocurrencies, bitcoins are generated by computer-solving cryptographic computational tasks that consume a lot of energy, called "mining."

Meanwhile, GPU-based mining for bitcoins is no longer worthwhile due to the immensely increased demands. As a result, new cryptocurrencies, so-called Altcoins, such as Ethereum, are being continually launched, which continue to be profitably mined with GPUs. In principle, normal computer processors (CPUs) are able to scrape new Altcoins, but they can only calculate a few (kilo) hashes per second and are therefore not suitable for mining in relation to the time and energy spent on them. In terms of efficiency, they are significantly beaten by graphics processors (GPUs), with especially graphics chips of the Radeon series from AMD have proven to be particularly powerful. As so-called mining rigs PC systems are referred to from commercially available hardware components whose sole task isCalculate crypto currencies using multiple graphics cards .

In order to counteract the resulting high heat development and to operate as many graphics cards as possible in parallel, these GPU-Miner systems usually use very open housings (comparable to benchtables) or partly adventurous, self-built housing creations. As with AMD CrossFire or NVIDIA SLI gaming PCs, most system-based mainboards can not use all PCI Express slots, as powerful graphics cards usually have wide dual-fan or even triple-fan coolers and so the space required for other GPUs is missing or, in the case of many mining PCs, all PCIe slots must be routed based on the respective graphics card constellation.

This is where the handy quad-mining adapter comes in and allows four graphics cards to be connected to a single PCIe slot on the motherboard when combined with separately available riser-card adapters ("to rise"). The quad adapter has four USB 3.0 ports and can be connected to as many riser cards. The USB 3.0 standard ensures sufficient bandwidth for the PCIe x1 output slot to which the quad adapter is connected to the motherboard. Since the GPU only performs calculations when mining and, unlike video games, no textures or shader data have to be transported to the graphics memory, the bandwidth available here is completely sufficient for this application.